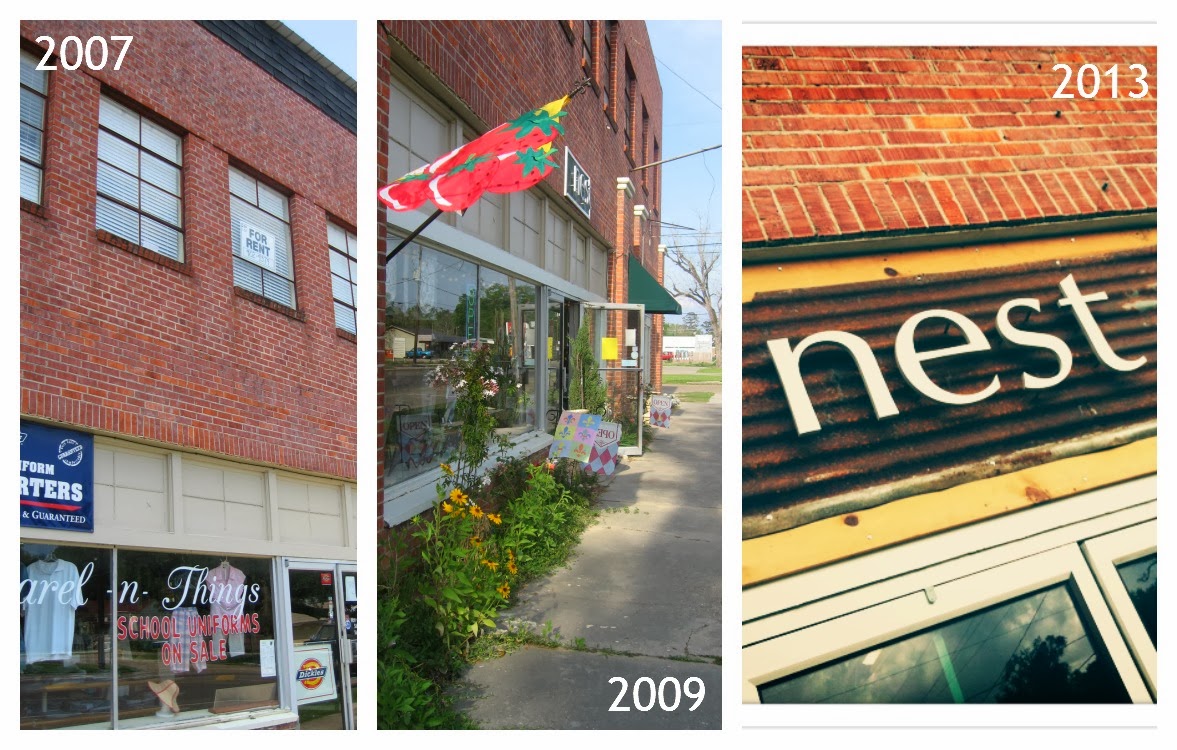 Tomorrow mark's the amazing 6th year anniversary of opening our shop, Nest Interiors in Ponchatoula, LA.  Actually, we opened on Leap Day, 2/29/08 (how appropriate), so if you're into technicalities - we're 1-1/2 years old.
We bought the building in 2007, with the eventual intention to take over the large retail space below - it was a hip hop clothing store.  The ladies that had ran it for a couple years - were a hot mess.  When we asked for a one year lease, they up and moved out within 30 days.  Guess what?  Now I get to become a retailer.
Check this space out - we ripped out very old carpet, added a fresh coat of paint to the ceiling and walls -- repainted the walls because the original color was neon yellow.  We kept the existing cash wrap and half wall between the two columns (those two columns sold me on the entire building - for real).
Things were going great in 2008, business was good, everyone in town loved us...but there were rumblings about the economy elsewhere.  One rep at the Atlanta Market, I'll never forget this, told us we were absolutely nuts to open up now.  Things were ok, we lived in the Katrina bubble - lots of money was flowing into the State and many New Orleans people relocated to our area.  But you know how it goes with hurricanes, right?
A lesser known hurricane hit us pretty significantly in late 2008.  We were one of two buildings that completely lost their roof.  The other building, housing one of the best antique stores in town, never reopened and was later demolished.  It took us 10 days to reopen.  The store was fine, but the upstairs apartments were wrecked.  We were totally swindled on the new roof; I completely lost my entire savings which was to fund the store until 2014 (no joke).  We had insurance, but thanks to Katrina - it didn't cover diddly squat.
Time to persevere, no longer a pipe dream...we needed the store to succeed.  Lots of hard work and frankly - credit cards kept us going through 2009.
Things did start to change in 2010, the recession was on like Donkey Kong.  In April of that year, the BP Oil spill occurred - guess where many oil workers live - yep, our town.  And the cherry on top, I had been feeling bad for a while - in November 2010, I was diagnosed with cancer.  That guy at our first market may have been on to something.
We were trying to be creative.  It was getting really hard to stock the shelves; there was literally no more money.  And one of our apartments had remained vacant for 9 months.  I started doing everything - making items, selling online, selling wholesale, giving classes.  We had so little inventory, I set up this "classroom" in the middle of the store.  It looked like shit - one of my customers told me too.

2011 was just a blur.  I was gone most of January thru April - between surgery and radiation.  Then when I returned, I couldn't work full time; so, the shop had unusual hours and everyone in town seemed annoyed and confused.  I was too - and I knew what was going on. 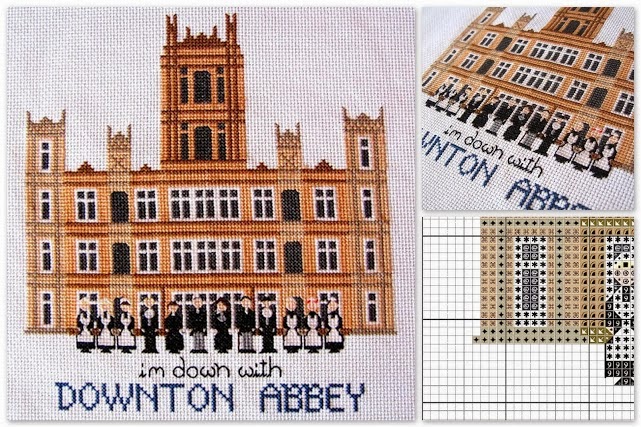 Something happened in 2012, my internet sales took off and a little show about a castle called Downton Abbey inspired me to create a cross stitch pattern that in many ways saved our own castle.  Again, when you are dead tired from radiation and you physically can't go anymore but your brain can - you work with what you have...that pattern has paid our bills, bought us inventory, and proved success is always within reach.
Also, between 2011 & 2012, I opened the shop to consignors to help fill our shops.  It was the last thing I wanted to do, and one of my biggest regrets.  It muddied our vision, customers complained (they always do) and some of the vendor personalities were just too much.  Most are gone now, except for a few exceptional people. 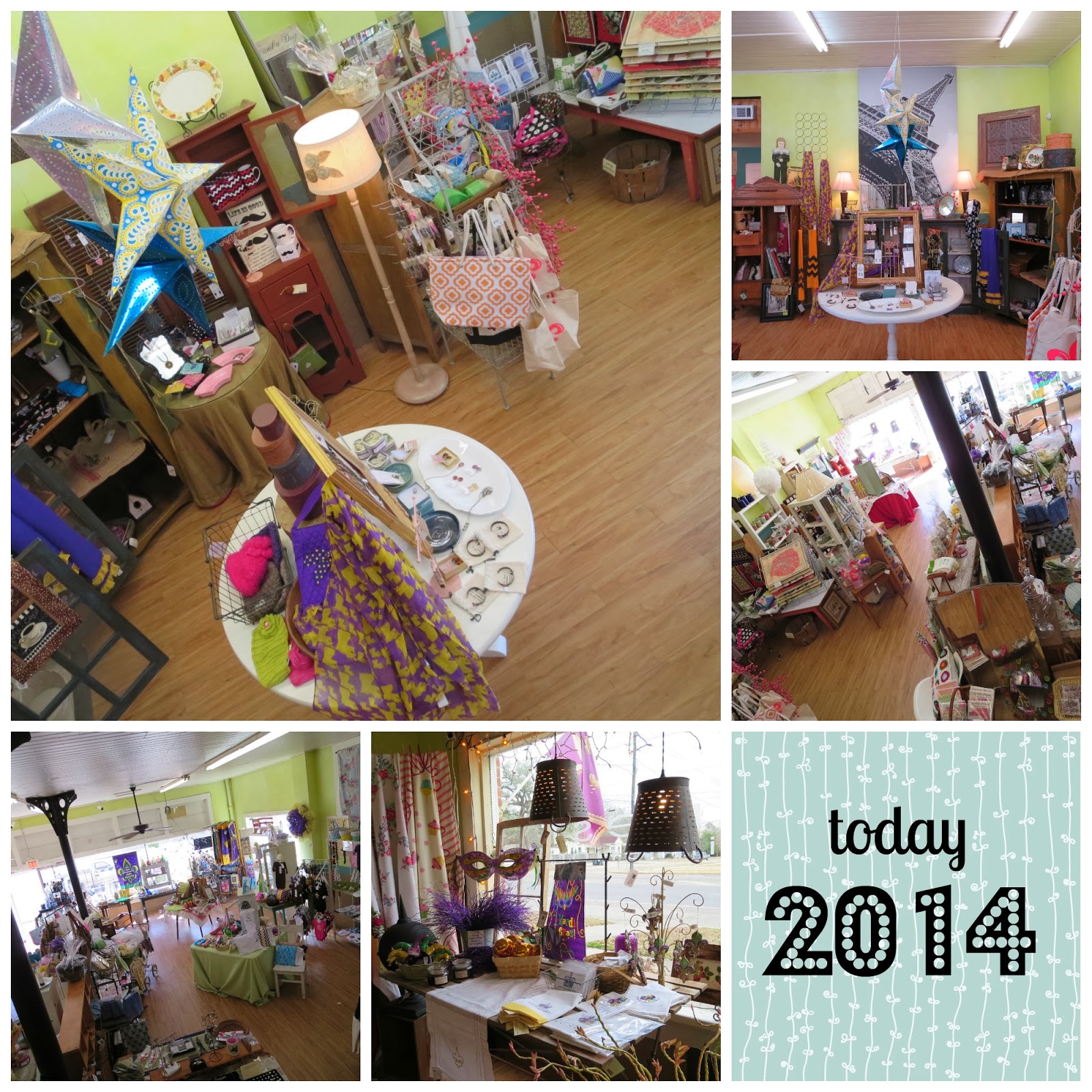 So, here we are - alive!  Looking better than ever (I always see room for improvement but, really it looks good in here).  Money is still tight, but we are able to advertise a bit more, shelves stay full and though I'm not as busy as I was in those first amazing months of 2008, the cash register still rings everyday.  It's funny after 6 years, the biggest compliment we could receive is in competition.  In 2008, we opened a wee bit from downtown.  Again, everyone said we were crazy - who would come ALL this way down (literally 3 short blocks) and this very month - another store has opened 3 doors down from us in the same block.

In regards to all these years, and so many naysayes...C always points me to this quote from the late Steve Jobs - which sums it up perfectly:


You need a lot of passion for what you're doing because its so hard. Without passion, any rational person would give up.
So if you're not having fun doing it, if you don't absolutely love it, you're going to give up.
And that's what happens to most people, actually.
If you look at the ones that ended up being successful in the eyes of society, often times its the ones who love what they do, so they could persevere when it got really tough.
And the ones that didn't love it, quit. Because they're sane, right?
Who would put up with this stuff if you don't love it?
So its a lot of hard work and its a lot of worrying constantly.
If you don't love it, you're going to fail.